"DID it hurt?" is the most common question asked when I tell someone that my eyebrows are not tinted, nor crafted with pencil and powder or tweezed to perfection, but they are in fact, tattooed with semi-permanent ink.

I feel no pain whatsoever, but more as though someone is drawing little dashes with a biro on my forehead with slight pressure.

As someone with three large tattoos already, the process of being tattooed is a familiar one. Lie down and grit your teeth through the momentary stinging pain and it will all be over soon. Those who say they feel absolutely nothing, or better still feel pleasure (Angelina Jolie I'm looking at you), when being tattooed are putting a brave face on it. Yes it hurts, but it’s not the insane torturous feeling that so many people imagine; it’s bearable.

In actual fact, having my eyebrows tattooed was painless. Painless and feelingless, as the numbing cream rendered my eyebrows and forehead an unflinching canvas for my artist Claire Hobson to work on.

Claire Hobson (previously interviewed here) is one of the most trusted professionals in the semi-permanent make up industry and I knew my eyebrows were in safe and expert hands. 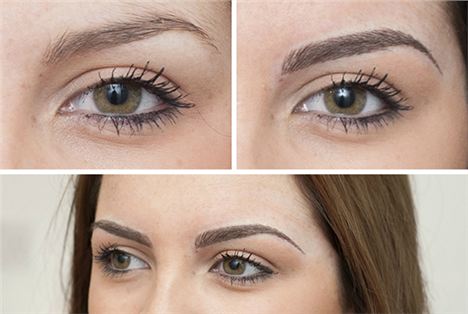 I’ll admit there were nerves present as I sat in the bright reception area of Castlefield’s Skin Viva clinic. Who wouldn’t be slightly uneasy at the thought of having wonky or uneven brows not just for a few weeks, but also for the next few years? This wouldn’t be the same as growing out a bad haircut, but instead would mean dealing with bad eyebrows for the rest of 2014 and thereafter.

"I’ve definitely seen some bad eyebrows in my time," laughs Hobson when I tell her my worries. She studies my eyebrows like a painter critiquing her work and before I can ask she’s tweezing away strays and taming my brows into a defined arch.

“Eyebrows should always be sisters not twins,” she tells me as she deftly pulls the last few hairs from their root. "People forget that."

My eyebrows tweezed by Claire, before being tatttooed

"Do you know you have one eyebrow higher than the other?" She asks. "It's just when you open your eyes. It means the muscles above your right eyebrow are working harder than your left, botox can correct it but it's not noticeable." Only to Hobson's scrutinising eye it seems, after all I've reached 23 years old without noticing any lopsidedness.

Once Hobson has given me a new eyebrow shape she sets about covering the area with a numbing cream. Within minutes I feel nothing and she can get to work. I lie back on a bed and try to tune out the whirr and buzz of the tattoo needle. 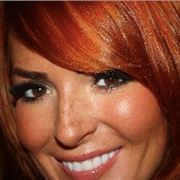 Claire Hobson"Just tell me if it hurts at all," Hobson says as she gets to work adding tiny little hairstrokes in a dark brown pigment to my eyebrows. I feel no pain whatsoever, but more as though someone is drawing little dashes with a biro on my forehead with slight pressure.

"They will look quite dark when they're first done but this fades. It's always better to have them a bit lighter and then darkened at a later date." As someone who spent her university years in Liverpool where nearly black eyebrows are commonplace I'm not concerned by the prospect of dark eyebrows; I'm more worried they won't be as dark as I like. "I've had quite a few Liverpool girls who would prefer to have their brows colour blocked but I don't do that. I use hair stroke as it gives a more natural effect."

As the small talk continues and I lie oblivious to the pain or how my eyebrows are Hobson continues to tell me about her career, and more importantly the brows she has come across in her time. "I had one woman whose brows were this strange rounded arch. I told her I could correct them but she didn't want it, she wanted this rounded arch going over."

Each to their own I guess.

I tentatively ask, "Has anyone ever hated their eyebrows when it's been done?" Hobson pauses, and I'm not sure if I've spoken out of turn.

"I hated mine at first, because they were so dark," she explains. "I even tried to scrub them off with oil. My mother-in-law too hated hers after I'd done them. She went home and sat in front of the telly watching Coronation Street and scrubbed at them with an exfoliator. They were red raw for weeks after, it looked so painful."

That is the one no-no for this treatment; getting them wet. No water whatsoever. I'm reminded to keep them dry - even whilst showering - until they are fully healed in approximately seven to ten days. "They'll heal quite quickly but just look quite like dry skin for a few days," said Hobson. Lovely.

Before I can quiz her anymore she's finished and I can inspect my new eyebrows. The tiny defined hairstrokes are clear and even though my forehead is pink, it's not sore and I don't have that same burning feeling I'm used to after normal tattoos.

Three days later: my eyebrows are peeling/scabbing like sunburn

I trot off home and try to have a shower that doesn't involve getting my eyebrows wet but still allows me to wash my face. No easy task I tell you.

Over the next week I experience the all too familiar itchy feeling that all tattoo lovers choose to forget when heading for their next piece of art. Wanting to scratch but not being allowed to scratch is one of the most niggling feelings you can experience. 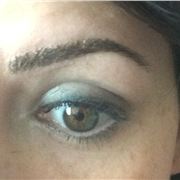 Close up: healing stageThe dry skin appearance was as true as Hobson described. Even my boyfriend noted it. "You've got stuff on your eyebrows," he said as he tried to reach and rub it away. A quick squirming allowed my eyebrows to stay in tact - just.

After the ten days is up my eyebrows were no longer scabby and dry looking but in fact, defined and darker as I had wished.

It might seem like a lot to go through just to have a defined eyebrow shape, but for somebody who previously spent a painstaking fifteen minutes in front of the mirror every morning it's a welcome procedure.

The only thing not welcome is the cost. At £595 for the treatment it's certainly not budget friendly. However this price does include a touch up and once done your brow tattoos are set for at least the next few years.

Still too pricey? Well nobody said the price of beauty would be cheap.

To contact Claire or find out about her clinics and prices across the UK, find her on twitter: @claire_j_hobson

Claire Hobson holds regular clinics in Manchester at the Skin Viva clinic, to book an appointment or consultation contact them via their website: